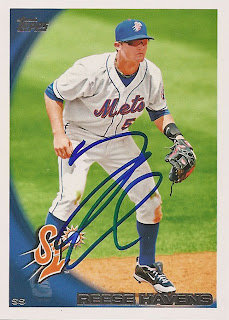 Who is this? Binghamton Mets second baseman Reese Havens

What is this? An autographed card from the 2010 Topps Pro Debut set


Where'd I get it? Havens signed it for be before a game in Trenton earlier this year.

Why is this so special? Havens is a highly-regarded prospect in the Mets farm system who has missed most of this season due to injury. The former first round draft pick spent last season in St. Lucie, where he hit  .247 with 14 home runs and 52 RBI in 97 games.

I'm not sure which signature is sloppier - this one, or the one on the card I posted earlier this week.
Posted by Paul Hadsall at 11:00 PM

I'd say this one is a little worse. Just tell people that he signed it in Japanese.

Don't know if you sell the cards since I know I don't sell my IP autos, but would you be willing to trade this card? I'm a huge Havens fan and have not been able to make it to Binghamton because I live on the Island.