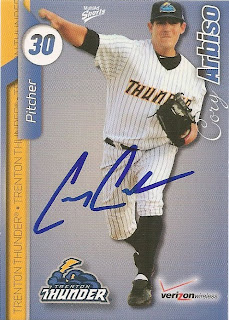 Why is this so special? If Austin Krum's card that I posted on Wednesday is the coolest card in this year's Trenton Thunder set, Cory Arbiso's just might be the worst. Just what's going on with his right arm? I can't be completely positive that it's not just a weird photo angle, but it looks like there were some odd photo editing issues there.

Arbiso was selected in the 22nd round of the 2008 draft by the New York Yankees. He made his debut with the Staten Island Yankees in 2008, and in his three professional seasons he has played at least one game at every level of the farm system.

Arbiso works as a swingman, pitching in the rotation and out of the bullpen.That generally means the organization doesn't consider you a true prospect, but who knows? Arbiso is 24 and is having a decent year in Trenton. He has a 5-2 record with a 3.42 ERA in 29 games (8 starts).

Arbiso's autograph would be devilish to use in a "Spot the Sig" style contest. It almost looks like his last name starts with the letter "C" the way he signed my card.
Posted by Paul Hadsall at 11:37 PM

I'm starting to come around to these Trenton cards. The greyed-out background kind of bugged me at first. But, the more autographs I see from the set, the more I like them. One thing you don't have to worry about in the set is a dark background.

I hope Trenton goes back to a more traditional card design next year, but somebody loves the player cutouts there.

They do look nice signed.