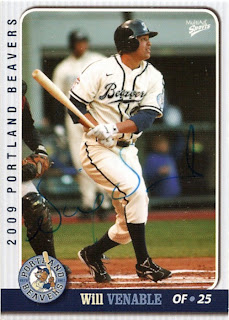 Who is this? San Diego Padres outfielder Will Venable

What is this? An autographed card from the 2009 Portland Beavers team set

Where'd I get it? My friend Bart went to a Portland Beavers game last year during his vacation. He gave me some cards, including this one.

Why is this so special? Venable, son of former major league outfielder Max Venable, was a seventh round draft pick of the San Diego Padres in 2005. He advanced through the minor league system. In 2007, he hit for the cycle as a member of the AA San Antonio Missions.

The signature on this card is very light, but it's fairly recognizable. Venable has taken liberties with his autograph to allow him to sign more quickly.
Posted by Paul Hadsall at 11:55 PM

I think that the Beavers have the best unis in minor league ball. It's too bad that they are moving next season.

I just heard about the Beavers' impending move over the weekend. It seems sort of sad.