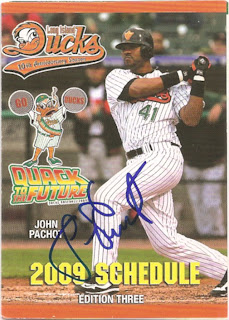 Who is this? York Revolution catcher John Pachot
What is this? An autographed Long Island Ducks pocket schedule
Where'd I get it? Pachot signed it for me after Friday night's game between the Revolution and Newark Bears.
How much did it cost? It was free.

Why is this so special? Check out the cool "Quack to the Future" logo somebody came up with for Long Island's 10th Anniversary last year.

Pachot made his professional debut in 1993 at the age of 18 for the Gulf Coast League Expos. Since then, he's appeared in more than 1,300 games in the minor leagues and independent baseball.

Pachot went to spring training with the Mets in 2005 and played in 21 games for the Norfolk Tides that year before getting his release. He has played for an Atlantic League team every year since then: the Camden Riversharks in 2006, the Newark Bears in 2007 & 2008, the Long Island Ducks in 2009 and the York Revolution this year.

Pachot does not have a pretty autograph, but I think this is the most legible version I've ever gotten.
Posted by Paul Hadsall at 11:30 PM