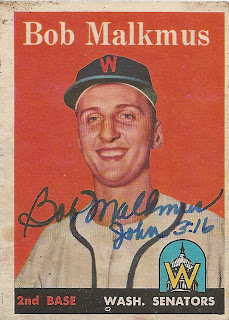 Who is this? Former Washington Senators infielder Bob Malkmus
What is this? An autographed card from the 1958 Topps set
Where'd I get it? I wrote to Malkmus on Monday and asked him to sign it; I got it back today. (It helps that we live in the same county)
How much did it cost? The card was a throw-in when I bought a $5 1970s Tom Seaver card at this month's local card show.

Why is this so special? This is one of the oldest baseball cards that I own, and it is the oldest one I have signed by a former player that I've actually met.

Malkmus played in parts of 6 seasons, for the Milwaukee Braves, Washington Senators and Philadelphia Phillies. He hit .215 with 8 home runs and 46 RBI in 268 major league games. One of those eight homers was given up by Hall of Fame pitcher Warren Spahn.

Malkmus currently works as a part-time scout for the Cleveland Indians. He can sometimes be found at Atlantic League baseball games.

Like most former ballplayers of his generation, Malkmus seems to take pride in his penmanship. He also inscribed one of the more famous verses from the Bible, John 3:16


For God so loved the world, that he gave his only begotten Son, that whosoever believeth in him should not perish, but have everlasting life. [King James Version]