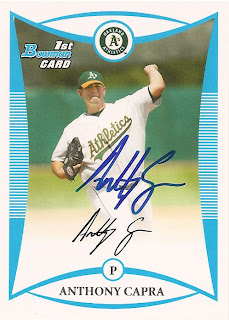 Who is this? Midland Rockhounds pitcher Anthony Capra
What is this? An autographed card from the 2008 Bowman set
Where'd I get it? Zach included it in a package he mailed to me earlier this month.


Why is this so special? After I finished scanning a bunch of cards today, I decided to post Capra's card because I looked him up to find out if he's related to former Mets and Braves pitcher Buzz Capra. I can't conclusively say, but it looks like he's not.

Anthony Capra was selected by the Oakland Athletics in the 4th round of the 2008 draft. He started his career with Kane County in the Midwest League that year, and he's made it as far as AA Midland in the Texas League this year.

I'm not sure where Zach got the card signed, but I think it's neat that Capra's signature is almost a perfect match for the facsimile on the card. That rarely happens, since the cards use contract signatures and players generally develop a quicker "autograph version" for use at the ballpark.
Posted by Paul Hadsall at 6:02 PM

I got that card signed in Tulsa, Oklahoma on the way back from my trip to Rickwood Field. He was sitting in the stands that night charting pitches and I was lucky enough to have someone ID him for me. I didn't realize how bad he was doing, though. I was just happy to find a couple of cards of him.

I do like his signature, though. I think it is funny that he shortens his shorter last name instead of his first name.