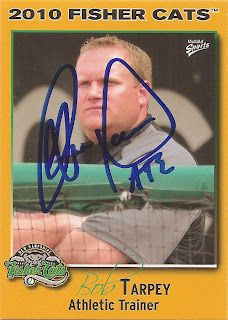 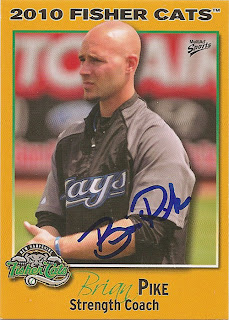 Who is this? Bob Tarpey, athletic trainer and Brian Pike, strength coach, for the New Hampshire Fisher Cats

What is this? Autographed cards from the 2010 New Hampshire Fisher Cats team set

Where'd I get it? They signed the cards at a game in Trenton earlier this year.

How much did it cost? Team set was $13 shipped.

Why is this so special? I really wouldn't mind if teams stopped including their trainers and strength coaches in minor league baseball card sets. When the cards are there, I try to get them signed -- it's fun to see what kind of reaction I get when I ask.

Both Tarpey and Pike were good sports. Pike was the last person off the field before the game between the Fisher Cats and Trenton Thunder. It took a couple tries to get his attention, but he came over and signed my card. He has one of the more legible autographs of the folks in that set.

I approached Tarpey after the game, as he was making another trip back into the stadium to bring out more equipment to load on the team bus. He seemed amused that someone was asking for his autograph, but he signed the card without any objections. I guess he doesn't get that much practice, because the placement of the signature is not exactly ideal.

For those who collected signed minor league cards, I'm curious - what do you do with the cards of the trainer, strength coach & mascots? I can't be the only one who tries to get them signed, can I? (I do draw the line at mascots - asking them for autographs is too weird for me.)
Posted by Paul Hadsall at 11:48 PM