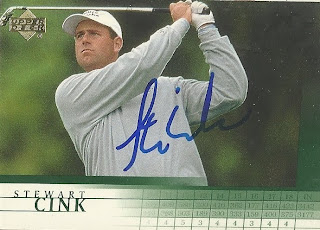 Who is this? PGA Tour Golfer Stewart Cink.
What is this? An autograph card from 2001 Upper Deck Golf.
Where'd I get it? I got this card signed by Stewart Cink after the second round at the Deutsche Bank Championship in 2007, when he did not make the cut.
How much did it cost? I paid about 10 cents for it at a local card shop along with a dozen or so other golf cards before the Deutsche Bank Championship.

Why is this so special? The Deutsche Bank Championship is played at the Tournament Players Club of Boston in Norton, MA near where I grew up and even closer to where I now live. I used to go to a practice round and one official round of the Deutsche Bank Championship with my Uncle and cousin over Labor Day weekend. Stewart Cink's autograph is special because, despite not making the cut at the 2007 Deutsche Bank, he won the 2009 British Open Championship and has won over $30 million in career PGA tour earnings. I like the way that the 2001 Upper Deck Golf cards look and the autograph fits nicely on the card.
Posted by George at 11:46 AM 1 comment: 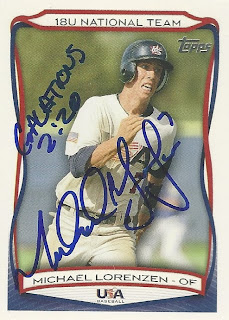 Who is this? Michael Lorenzen, an outfielder with the 2011 Team USA Collegiate Team from Cal State Fulerton.
What is this? An autograph card from the 2010 Topps Team USA Box Set.
Where'd I get it? I got this card signed, along with two other Team USA cards, by Michael before yesterday's Team USA v. New England Collegiate All State game at Fenway Park in Boston.
How much did it cost? I got the card when I bought the Team USA box set for around $10.00.

Why is this so special? This card is special to me not only because Michael is a top prospect with an elite outfield arm and speed, but because he was so nice to all of the fans. I asked him if he could sign a few cards when he was coming out of the dugout and he told me that he would as soon as he finished outfield practice. After watching him throw a few lazers from deep center right to home plate, he came back and signed for me.

He wrote a different bible verse on each card and asked me if I was a "believer." When I told him that I was he said to "Preach the word to all nations." He signed three cards for me, inscribing Galations 2:20 ("I have been crucified with Christ and I no longer live, but Christ lives in me. The life I now live in the body, I live by faith in the Son of God, who loved me and gave himself for me."), John 14:6 ("Jesus answered, “I am the way and the truth and the life. No one comes to the Father except through me."), and Romans 10:9 (" If you declare with your mouth, “Jesus is Lord,” and believe in your heart that God raised him from the dead, you will be saved."). 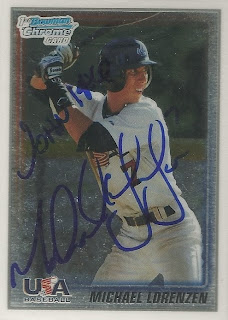 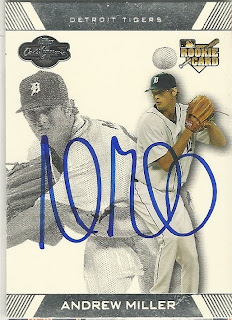 Who is this? Red Sox pitcher Andrew Miller.
What is this? An autograph rookie card from 2007 Topps Co-Signers, card #100 in the set.
Where'd I get it? I got it before a Pawtucket Red Sox game at McCoy Stadium in May.
How much did it cost? I got it from a 10 cent box at my local card show at the Mansfield Holiday Inn in March.

Why is this so special? Andrew Miller played for the AAA Pawtucket Red Sox from April to mid-June of this season after being acquired from the Florida Marlins in a trade for LHP Dustin Richardson in the offseason. Miller was selected six overall in the 2006 draft by the Detroit Tiger's out of the University of North Carolina, where he won Baseball America's College Player of the Year Award as a Junior and became the first player drafted in 2006 to make it to the Majors when he made his debut on 8/30/2006 against the New York Yankees. Unfortunately, so far in his career, Miller has been unable to find the form that made him such a dominant pitcher in college and has posted mediocre numbers.

This autographed card is so special because Andrew Miller is a true Major Leaguer, even when he was in the Minors. While many players with his skills and background avoid fans at Minor League ballparks, Miller was always very kind: signing autographs, taking pictures, and talking to fans. I hope that he remains in Boston and finds the success that has eluded him for too long, and will have his autographed cards as a reminder of what a nice guy he was in Pawtucket.
Posted by George at 7:31 PM No comments: 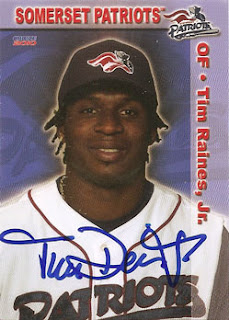 Who is this? Newark Bears outfielder Tim Raines Jr.
What is this? An autographed  2010 Someset Patriots team set card
Where'd I get it? Raines signed it for me before Monday's Newark Bears game.
How much did it cost? The autograph was free, and my Dad picked up the team set when he went to see a Patriots game earlier this month. It really didn't cost me anything.


Why is this so special? Tim Raines Jr. is the son of former Montreal Expos star Tim Raines. They got to play together in four games for the Baltimore Orioles at the end of the 2001 season, and for the second year in a row Raines Jr. is playing for his father's team.

Though the younger Raines is not the player that his father was, he did appear in 75 major league games. At age 31, he still has the speed to steal bases and he's one of the best players on the Newark Bears team. However, it's unlikely that he'll have another chance to play affiliated baseball at this point in his career.

Below is a Bowman Heritage card showing Raines Jr. as an Oriole that he signed for me last year. 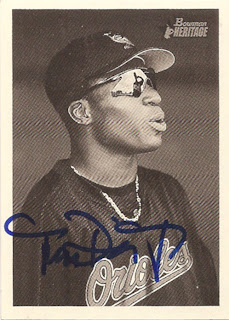 Posted by Paul Hadsall at 1:27 PM No comments: