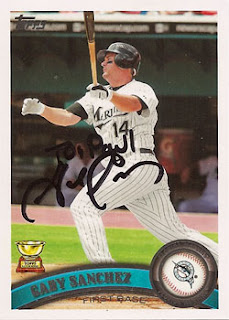 Who is this? Florida Marlins first baseman Gaby Sanchez
What is this? An autographed 2011 Topps card
Where'd I get it? I wrote to Sanchez at the Marlins spring training camp and asked him to sign it
How much did it cost? I got the unsigned card out of a pack.

Why is this so special? Sanchez hit .273 with 19 home runs and 85 RBI as a rookie for the Florida Marlins last season. He finished fourth in the National League Rookie of the Year voting, behind Buster Posey, Jason Heyward and Jaime Garcia, but ahead of Starlin Castro and Ike Davis.

His autograph is a bit tough to make out since he signed in black on a mostly dark background, but he did personalize the card to me.
Posted by Paul Hadsall at 7:20 AM No comments: 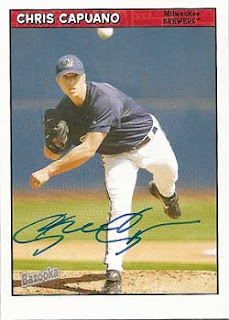 In addition to Capuano's autograph, I also received a signed Pedro A. Martinez card last week. (I already wrote about it on my other blog, RandomBaseballStuff.com.)
Posted by Paul Hadsall at 11:59 PM No comments: 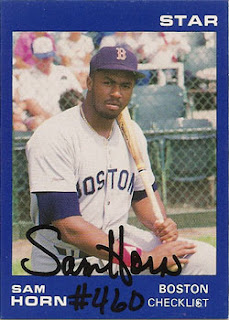 Who is this? Former Boston Red Sox slugger Sam Horn
What is this? An autographed card from an 11-card set produced by Star. Co. in 1988.
Where'd I get it? Bought from a local card show dealer
How much did it cost? 50 cents (you can get your own full set for $32.95 on eBay if you want; I just have the signed checklist card.)


Why is this so special? Sam Horn was once a highly-regarded prospect. He hit 14 home runs in 158 at-bats for the 1987 Red Sox as a rookie. He never lived up to the expectations fueled by that early success, but he did play in the majors for parts of 8 seasons and went on to play in Taiwan.

Horn currently works for the New England Sports Network as a baseball analyst.

Horn's autograph is clear and easy to read, but the signatures on the Star Co. cards look very different from the other Sam Horn autographs I've seen on the internet.
Posted by Paul Hadsall at 6:09 PM 2 comments: 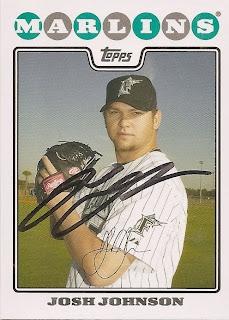 Who is this? Florida Marlins pitcher Josh Johnson
What is this? An autographed 2008 Topps card
Where'd I get it? I bought it from former Mike Pelfrey collector Anthony when he decided to get out of the baseball card hobby last fall.


Why is this so special? Josh Johnson is a two-time All-Star and the best pitcher in the Florida Marlins rotation. I watched him hold the Mets hitless for six innings earlier tonight en route to a 6-2 Opening Day victory. Johnson has a lifetime 8-1 record against the Mets in 13 games.

Though Johnson only had an 11-6 record last year, he led the National League in ERA (2.30) and adjusted ERA+ (182) last season. It's scary how good Johnson could be with better defense behind him.

Johnson's autograph isn't particularly pretty, but it's easy to make out his initials.
Posted by Paul Hadsall at 11:32 PM No comments: