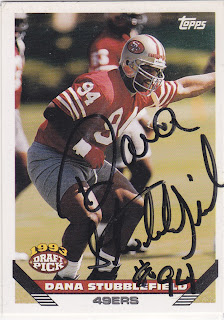 Who is this? Former 49er, Dana Stubblefield.

Where'd I get it? At a free autograph signing around 1994.

How much did it cost? Whatever a pack of '93 Topps cards cost.

Why is this so special? This card is special because it is featured on Auto-Matic for the People. All of us (including me) have been slacking of late (we are probably too busy buying up all of the new '09 baseball cards). So, I figured that I should post something.

As for this card, I got it signed at one of the local car dealerships in 1994. Luckily, one of my neighborhood friends heard about it on the radio and we were able to snag a ride over there to get some signatures. I got this card signed (it was the only one I had of him) and I got a 1994 University of Kansas schedule-poster signed. The signing was free.

Stubblefield had a great rookie season in 1993. He notched 10.5 sacks that year and was the Defensive Rookie of the Year. His sacks steadily dropped for the next three seasons. Then, in 1997, he had a 15 sack season. He was awarded the Defensive Player of the Year Award. He then went to Washington via free agency. In his three years there, he never had more than 3 sacks. He played three more seasons in San Francisco and Oakland but could not rekindle his old glory.

His name came up in the BALCO investigations and he is currently serving a two-year probation. He also appeared in the movie "Reindeer Games".

I hate the photo on this card. He was a first round draft pick and I would have preferred a photo of him playing in college. Instead we get a training camp photo of him warming up in shorts, without shoulder pads on, and with his last name on the front of his helmet so all of the coaches will know who he is.
Posted by zman40 at 12:25 AM 3 comments: 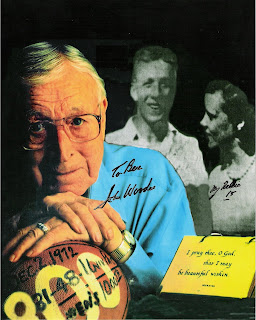 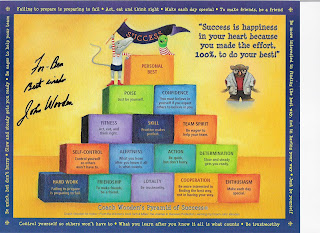 coach wooden, of course, won 10 national titles in 12 years while coaching the ucla bruins from 1948 to 1975. he also won a national title as a player at purdue in 1932. he is widely regarded as the greatest coach in the history of sport, and he has continued to be a teacher into his 99th year.
my son and i both appreciate the photo and the chart, as well as the attention coach wooden has given to character development. thank you coach!
Posted by gcrl at 12:41 AM 2 comments: 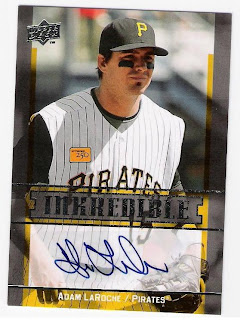 Who is this? good question. the card and auto sticker say adam laroche, 1st baseman for the pittsburgh pirates. the picture tells a different story

What is this? an autograph card from 2009 upper deck baseball

Where'd I get it? in 1 of 4 hobby packs i picked up a couple of days ago

Why is this so special? i suppose i could call it an error card. the picture is of adam's little brother andy, who was involved in the manny ramirez trade last july. seriously, upper deck. where is the quality control? it's reminiscent of the 95 topps juan lebron/carlos beltran bait and switch.

it's a sticker auto, by the way.

actually i would rather have a card of andy than adam, but that's just me.
Posted by gcrl at 1:15 AM 2 comments: