Who is this? Hawks Hall of Famer Bob Pettit.

What is this? An autograph card from 1998-99 Upper Deck Century Legends, card number BP.

Where'd I get it? Off of an auction site several years ago. 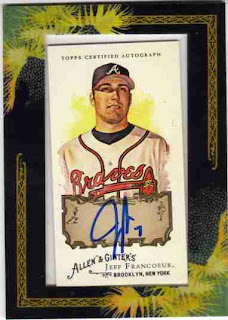 Who is this? Braves Natural, Jeff Francoeur.

What is this? An autograph card from 2008 Allen & Ginter, card number AGA-JBF.

Where'd I get it? From reader Todd S.

How much did it cost? Traded for it.

Why is this so special? An autograph from a player on my favorite team from my favorite product, what's not to like? Now I just need to find something to send Todd... What is it with Royals fans? The team hasn't done anything in 20 years and there are legions of fans out there clamoring for their cards. Royals and Indians especially are trading gold. I'm sure I have something up my sleeve to send. Anyway, there's not much to say about the A&G autos that hasn't been said. The cards look great, the signatures usually look good despite the tiny auto space on the card, the black borders are spooky and mysterious, just great looking cards. The back even calls out machine Francoeur a Star Outfielder. Not after this season... in fact, Todd may come to regret trading this off as there have been rumors of a Frenchy - Brian Bannister swap for a few months now. I don't think it'll happen though, you don't sell low on a fan favorite like Jeff. I think this year was just part of a natural progression. Two years ago he hit for power. Last year he started walking more and hit for average. This year he fell off a cliff. That means next year he''ll do the exact opposite and hit .300 with thirty homers and walk 50 times. In my dreams, perhaps. 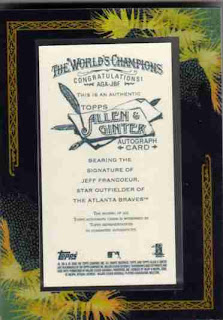 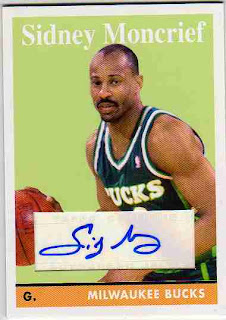 Who is this? Milwaukee Bucks guard Sidney Moncrief.

What is this? An autograph card from 2008 Topps Basketball, card number 177.

Where'd I get it? Out of a retail pack.

Why is this so special? I liked last year's Topps basketball. I thought the black borders worked well with the basketball photos, and the rookies and the retro parallels looked goood. This year isn't that good for one reason: once again Topps short printed the rookies. I really don't care about basketball cards that much anymore to go chasing after short prints in a set. I have bought a couple of packs out of curiosity and this was in one of them. This pack was lying on some blasters by itself at Wal-Mart. This was in the dead zone between the period after I had mostly finished my A&G set and before Masterpieces came out, so I grabbed it. Apparently a searcher abandoned it or forgot about it, because this autograph was inside. The pack was definitely searched though, because the auto card has a slight crease near the signature due to the pack being bent. That kind of thing is somewhat common on thick relic cards and it doesn't really take away from it, but it has lost the coveted GEMMINT!!1 designation craved nowadays. I don't care, I like the card anyways.

Sidney was one of the all around stars of the '80s. He led the Bucks to tons of wins, but never got past the more dominant Celtics or 76ers for a title. Moncrief could score, averaging over 15 points a game for his career but he was best known as a tenacious defender. He was a two time Defensive Player of the Year and was acknowledged by Michael Jordan as a fierce competitor. After 10 years in Milwaukee he played one last year with Atlanta, so this is a Hawks autograph as far as I'm concerned. This card is using the 1958 Topps baseball design which looks really good with basketball subjects. It's also as thick as a relic card for some reason. The autograph is on a sticker, but the sticker is embedded into the card making the whole thing look better in my opinion. The signature is a minimalist Sid M. but still looks pretty darn good on the card. Good stuff from Topps, I wish they hadn't screwed up the set with those short prints though. 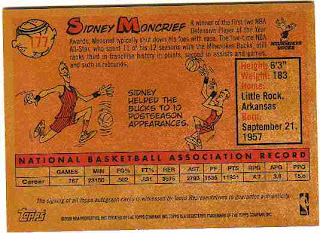 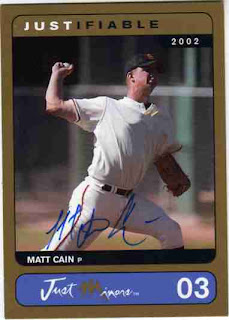 Who is this? Giants pitcher Matt Cain.

Why is this so special? I think Matt Cain is a really good pitcher that's just gotten stuck on a bad team. Yeah, he's lost 30 games the past two years, but check out the other stats. He's got a career ERA of 3.74. He racks up strikeouts and has a reasonable amount of walks. He's averaged over 200 innings a year over his three full seasons. And the guy is only twenty-three. That's why I was surprised to see it in the cheapo binder for only three bucks. A few years from now he could be a Cy Young contender and the card is getting blown out the store. Granted, it's a Just Minors auto. And the signature is kinda scroungy to be honest. And he isn't really a superstar by any stretch of the imagination right now. But isn't that what prospecting is all about? Finding diamonds in the rough for cheap? Why should an autograph card of one of this year's draft picks go for big bucks when an established young pitcher in the majors doesn't even deserve a toploader or a spot in the display case? Why am I complaining about getting a card of a player I think will be a star for so cheap? I guess it's just stupid expectations blinding me and the rest of the collectors out there. The brand new hotness? Gotta pay big bucks for their cards. Established players, not so much. Former dominating pitchers, can't even give them away. That's one thing about this hobby that some people know... While everyone else is chasing down the big hit from that brand new product, there are neglected gems out there that can be gotten for a song. 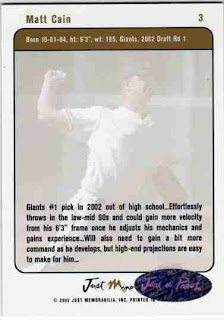 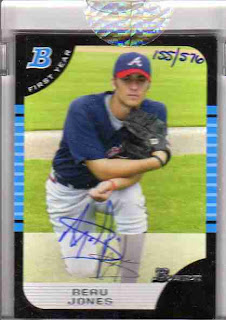 Who is this? Braves pitching prospect Beau Jones.

What is this? An autographed buyback card from 2006 Bowman Originals, card BDP33. The card is hand serial numbered 155/576.

Why is this so special? I'm still wondering how I got this card for a buck. There must be an ancent Indian curse on it or something. It's another buyback card from Bowman Originals, which had two of these encased autos in every very expensive pack. And I just picked this one up for a buck, lucky me. Beau is another in my increasingly large lefty reliever autograph collection. He was the #41 overall pick in the 2005 draft, was once in Baseball America's top 10 Braves prospects list and was sent to the Rangers in the Mark Teixeira trade. Ah, now I know how I got it for only a buck. He's only 21 years old though so in a few years this might be a hot card. Or not. I mean, he's a lefty reliever for Texas, even if he makes the bigs Arlington will wear him out no matter how good he is. Of particular note is how closely the autograph squiggle matches the squiggle printed on the original Bowman card. That's consistency! 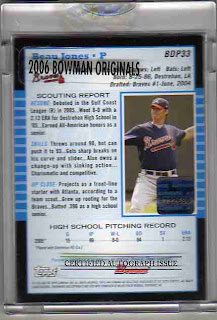