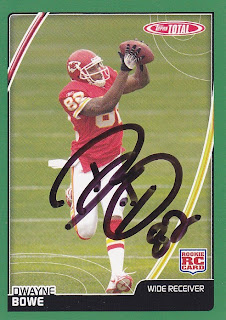 Who is this? Kansas City Chiefs All Pro wide receiver, Dwayne Bowe
What is this? An autograph card from the 2007 Topps Total set
Where'd I get it? At the Menards grand opening in Salina, Kansas yesterday
How much did it cost?The autograph was free, the card was a dollar.

Why is this so special? After a failed drug test and a bunch of dropped passes, Dwayne finally had a breakout year last season for the Chiefs. He set the Chiefs single season record for consecutive games with a touchdown with seven straight and for most touchdowns in a season with fifteen.

I am not a huge football fans by any means and I normally wouldn't have gone out of my way for this autograph. But, I just happened to be at the local card shop last week looking for some Gypsy Queen when the shop owner asked me if I was going to see Saberhagen this week. I had no idea what he was talking about, so he told me about the big Menards grand opening week schedule that includes autograph appearances from Bowe, Bret Saberhagen, and Christian Okoye. I didn't find any Gypsy Queen at the shop that day, but I did pick up two cards of Dwayne Bowe. I figured I would head over for the event just to get an idea of what it was going to be like for Saberhagen.

And, I am glad that I went since there was a much larger turnout than I anticipated. I got to the store about forty minutes before the signing began and I was amazed to see 200-300 people already there. Dwayne arrived promptly at the 6:00 scheduled start and I did not make it through the line until right before 7:30. Who know what it will be like for Saberhagen. For all I know, there could be fewer people there since the Royals aren't nearly as popular as the Chiefs are around here. But, I guess I will find out tomorrow.

I was watching a Chiefs game last year when they showed a clip of Dwayne. He said that he always wanted a bumper sticker that read "somewhere over the Dwayne Bowe". I couldn't help but laugh at that. I almost asked him to inscribe that on the card, but it looks like there wouldn't have been much room for that.

As for Bowe's signature, I have no idea what is going on with it. I can make out a "D" and his number and that is it.

Here is the other card that I got signed yesterday. 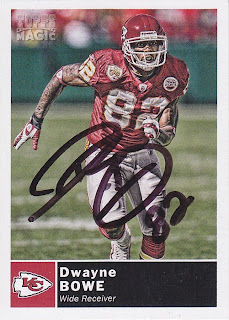