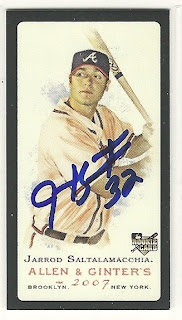 Who is this? Red Sox catcher Jarrod Saltalamacchia.
What is this? An autographed black bordered mini card from 2007 Topps Allen & Ginters.
Where'd I get it? Jarrod signed this card for me before a game last year when he was playing for the Triple-A Pawtucket Red Sox.
How much did it cost? I got the card for 15 cents at my local card show last July. I bought it because I love mini cards and I buy every short-printed mini card that I can find for less than 25 cents.

The buy was made even better when the Red Sox acquired Saltalamacchia about a week or so later and he was assigned to the Paw Sox.

Why is this so special? If he only had one at bat in his entire career, Jarrod would still have a special place in baseball history by holding the record for the longest last name in the history of MLB with 14 letters. Fortunately for Salty and the Red Sox, he has really put things together this year and is a major reason why the Red Sox are in first place in the American League East as they go into September.

The card looks great, and autographs always look fantastic on Allen & Ginter's. Jarrod was very friendly and a great signer when he was in Pawtucket last season and I hope that he continues to find success with Boston.
Posted by George at 10:48 PM 1 comment: 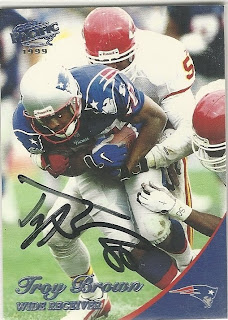 Who is this? Former New England Patriots wide receiver, cornerback, and punt returner Troy Brown.
What is this? An autograph card from 1999 Pacific.
Where'd I get it? I got this card signed at Patriots' training camp in 2001 or 2002.
How much did it cost? I got it when I bought the team set in 1999. I probably paid $5 or so for the set.

Why is this so special? Other than Tom Brady, Troy Brown was perhaps the most important player on the New England Patriots' teams that won three Super Bowls between the 2001 and 2004 seasons.

Drafted in the eighth-round of the 1993 draft out of Marshall, Brown spent most of his first four seasons as a Special Teams ace before having a breakout 1997 season when he had 41 receptions and 6 TD catches.

Brown had his best statistical season in 2001, when he caught 101 passes, including 5 touchdowns on his way to a Pro Bowl and All-Pro season.

In 2004 the Patriots turned to their leader to take on a new challenge: playing cornerback. Ravaged by injuries in the secondary, Brown may have helped save the Patriots' season, intercepting three passes and recovering two fumbles.

Brown retired as the Patriots' all-time leader in receptions, was a member of the New England Patriots 50th Anniversary Team, is a member of the College Football Hall of Fame, and is one of the most beloved players in the history of New England sports.
Posted by George at 12:57 PM No comments: 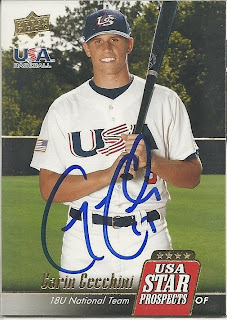 Who is this? Red Sox Third Base Prospect Garin Cecchini.
What is this? An autograph card from 2009 Upper Deck Signature Stars.
Where'd I get it? I got this card signed by Garin before the New York-Penn League Short-Season A-League All-Star Game in Lowell, MA on Tuesday.
How much did it cost? I bought this card for about ten cents a year ago.

Why is this so special? Garin was the Red Sox fourth-round pick in 2010 and he received a $1.31 million signing bonus to lure him away from attending LSU. A former member of the Team USA 18U squad, Cecchini lead the team in doubles and slugging percentage during the Pan Am Junior Championships, besting teammates Bryce Harper and Manny Machado.

Garin made his professional debut this season for the Red Sox Short-Season Affiliate Lowell Spinners. In 32 games, Cecchini batted .298 with 3 HR, 12 2B, 23 RBI, 12 SB, and an .898 OPS, impressive enough to earn a spot on the NYPL American League All-Star Team. Unfortunately, Garin injured his forearm on July 23 and is likely to miss the rest of the season. Nonetheless, even in his limited time, Cecchini demonstrated the above-average tools that made him a Top 10 Prospect for the Red Sox before the 2011 season and he should begin next season with the Low-A Greenville Drive.

Garin signed a total of six cards for me. Knowing that he is religious and that he used religious themes for his 2009 Upper Deck Team USA Inscriptions cards, I asked him to include a bible verse on some of the cards. He signed my 2011 Bowman card with Psalm 83:18 (That men may know that thou, whose name alone is JEHOVAH, art the most high over all the earth.), telling me that he has that verse on his glove.

I had heard rumors that Garin was a tough sign, but he was very friendly and talkative with fans. 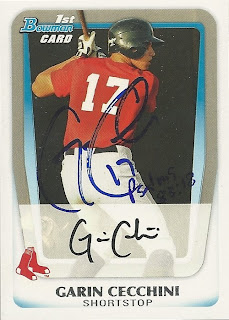 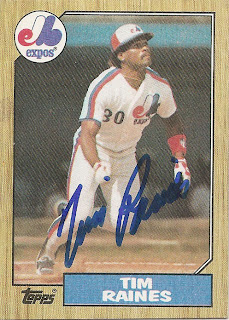 Who is this? Newark Bears manager Tim Raines
What is this? An autographed 1987 Topps card
Where'd I get it? Raines signed it before a Bears game last week
How much did it cost? 1987 Topps cards seem to spontaneously appear, and the autograph itself was free


Why is this so special? Tim Raines is a seven-time All-Star, and was the MVP of the 1987 game. He has three World Series rings (two with the Yankees and one with the White Sox) and had his number retired by the Montreal Expos. Raines has 808 career stolen bases, fifth all-time in major league history.

I don't think that Raines really enjoys signing autographs, but he does it for the handful of fans that come to Newark Bears games. His signature is impressively legible.
Posted by Paul Hadsall at 8:56 PM No comments: 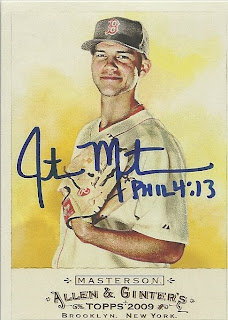 Who is this? Cleveland Indians starting Pitcher Justin Masterson.
What is this? An autograph card from 2009 Topps Allen & Ginter.
Where'd I get it? I got this card signed through the mail by Justin in August of 2009, right after he was traded from the Red Sox to the Indians.
How much did it cost? I paid 50 cents for the card, plus postage.

Why is this so special? This is the first card that I ever got signed through the mail and kicked-off my Justin Masterson super-collection. Justin is/was (I havn't sent him anything since Sping Training and he has had a monster year in 2011) a great signer through the mail and seems like a very decent and down-to-earth king of person.

The A&G cards look fantastic signed and this autograph helped start my hobby of getting cards signed through the mail.
Posted by George at 10:30 PM 1 comment:

Who is this? Tiger Woods.
What is this? An autograph ticket from the 2005 Deutsche Bank Championship Gold Tournament.
Where'd I get it? I got this ticket signed by Tiger during his practice round on August 31, 2005.
How much did it cost? My uncle got the ticket for me, and I think that it cost around $20.
Why is this so special? Tiger Woods is one of the greatest golfers of all-time and his autographs is one of the most difficult and valuable signatures of any modern athlete. While I do not support some of the decisions that he made off the course, watching Tiger golf was one of the best sports memories that I have ever had.

Tiger's signature is clear and legible and looks great on the ticket that features him and Vijay Singh. This is one of, if not THE, best autographs that I have ever got in-person and is one of the centerpieces of my collection.

Here is a close-up of Tiger's signature: 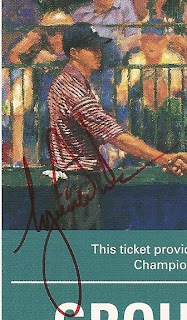 Posted by George at 1:41 PM No comments: 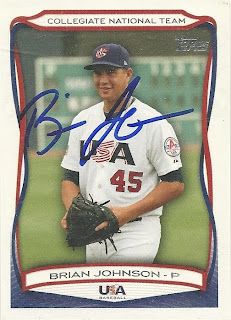 Who is this? Pitcher/Designated Hitter Brian Johnson of the Florida Gators, Team USA, and Yarmouth-Dennis Red Sox of the Cape Cod Baseball League.
What is this? An autograph card from the 2010 Topps Team USA Box set.
Where'd I get it? I got this card signed by Brian before a Yarmouth-Dennis game against the Brewster Whitecaps last week.
How much did it cost? I bought the whole set for around $9.

Why is this so special? It isn't everyday that you find a pitcher who is also one of the best hitters in college baseball. Brian has been an important part of Florida's College World Series teams in 2010 and 2011 and is one of the most interesting prospects in the 2012 draft.

While his signature does leave something to be desired, the blue ink does look sharp and he was nice enough to sign three cards for me (two 2010 Topps and one Bowman Platinum).
Posted by George at 10:00 AM No comments: