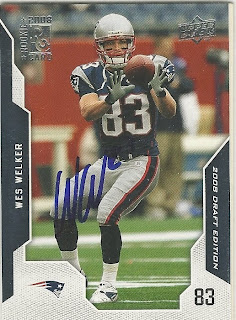 Who is this? Patriots' Wide Receiver Wes Welker.
What is this? An autograph card from 2008 Upper Deck Draft Edition.
Where'd I get it? I got this card signed by Wes Welker during Patriots' training camp in 2008.
How much did it cost? I think I paid about 50 cents for the card in 2008, which is far more than I would spend on it now, but seemed like a good deal at the time.

Why is this so special? From a signature perspective, this autograph is crap. Wes Welker's signature is essentially W W 83.

Nevertheless, Welker has been a tremendously productive and important part of New England's offense since he joined the team in 2007. Although the Patriots have not won a Super Bowl during his time with the team, he has become Tom Brady's go to receiver and was a Pro Bowler in 2008, 2009, and 2010.

Hopefully the Patriots can reverse their playoff skid in 2011 and finally find their way back to the Super Bowl. If they do so, there is no doubt that it will be due, at least in part, to the consistent excellence of Wes Welker.
Posted by George at 10:57 PM No comments: 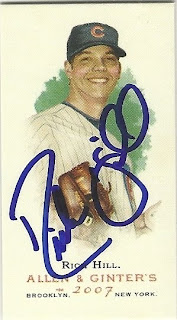 Who is this? Boston Red Sox pitcher Rich Hill.
What is this? An autograph mini card from 2007 Topps Allen and Ginter's.
Where'd I get it? I got this card signed by Rich earlier this season when he was a member of the Triple-A Pawtucket Red Sox.
How much did it cost? Not much. I found this card in a nickel or dime box at my local card show in Mansfield, MA.

Why is this so special? Rich Hill is one of the nicest players that I have had the pleasure to meet since I began collecting baseball autographs three years ago. Born in Boston, MA, Hill attended Milton High School before attending the University of Michigan. He was drafted by the Chicago Cubs in the second round of the 2002 draft and made his Major League debut with the Cubs in 2005.

Now 31 years old, Hill has played parts of seven seasons in the Major Leagues with the Cubs, Orioles, and Red Sox. His best seasons came in 2007 as a member of the Cubs when he finished eighth in the NL with 8.446 strikeouts per 9 innings and a WHIP of 1.195. Unfortunately, Hill struggled in 2009, forcing his return to the Minors.

Hill appeared to have turned things around with the Red Sox out of the bullpen in 2010 and 2011, not allowing a single run in 12 innings pitched while striking out 15 batters. However, just as things appeared to be getting better, Hill was found to have an elbow injury that required season-ending Tommy John Surgery early in the 2011season.

Hopefully Hill will recover quickly and be back to the Boston bullpen in 2012.
Posted by George at 7:58 PM No comments: 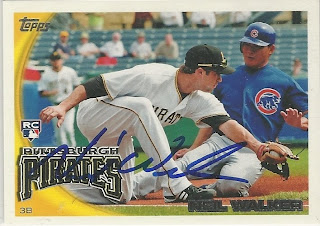 Who is this? Pittsburgh Pirates Second Baseman Neil Walker.
What is this? An autograph card from 2010 Topps Series 1.
Where'd I get it? I got this card signed by Neil when he was a member of the Triple-A Indianapolis Indians before a game against the Pawtucket Red Sox in 2010.
How much did it cost? I got the card when I bought the 2010 Topps Series 1 set.

Why is this so special? Neil Walker had a tremendous 2010 season that earned him a place on both Baseball America's and Topps Major League All-Rookie teams. He has been solid at the plate and in the field and is a major reason why the Pittsburgh Pirates have regained respectability.

In addition, this is one of the best 2010 Topps cards that I have gotten signed thus far in my quest to get as many cards from the set signed as possible. To see my 2010 Topps Autograph Project, click here.
Posted by George at 11:29 AM No comments: