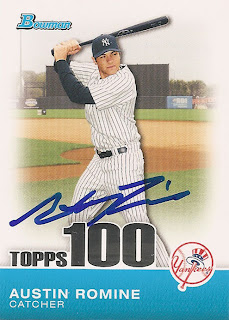 Who is this? Trenton Thunder catcher Austin Romine
What is this? An autographed card from Topps 100 insert in this year's Bowman set.
Where'd I get it? Romine signed it before last Sunday's Trenton Thunder game.
How much did it cost? I spent $1 for the card, the curse of living in the New York metro area.

Why is this so special? Romine was ranked as the 2nd best prospect in the Yankees' farm system and the 86th best in all of baseball by Baseball America at the beginning of the 2010 season.

Despite the hype (and the daily demand of autograph seekers), he seemed like a pleasant enough kid. Since he had the day off on Sunday, he spent 5-10 minutes signing autographs along the stands by the dugout. I don't think he stopped before everybody got one.

In 101 games, Romine is batting .266 with 8 home runs and 58 RBI. If he played any other position, I don't think those numbers would have anybody excited. But he is a catcher, and from the one game I saw him play in the field he looked like a pretty good one.

Romine has a very angular, compressed autograph. It's perfect for baseball cards, but I think he should probably work on it a little more before he starts signing sweetspot baseballs for Steiner. :) 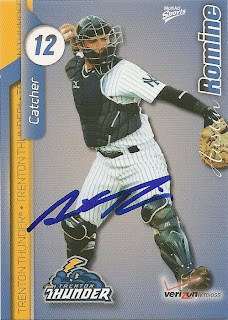