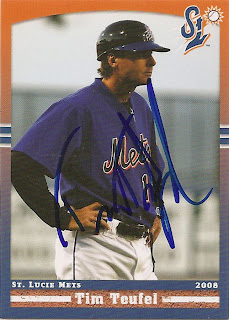 Who is this? Binghamton Mets manager Tim Teufel

What is this? An autographed card from the 2008 St. Lucie Mets team set

Where'd I get it? Teufel signed it for me after a game in Trenton earlier this year.

Why is this so special? Teufel was a member of the 1986 World Champion and 1988 NL East Champion New York Mets teams. I was really looking forward to meeting him when I heard that he'd be managing the Binghamton Mets team this year.

The first time they came to Trenton, he missed most of the series to attend a graduation. On their second trip, the game I had a ticket for was John Maine's rehab start, so there were tons of extra people around before the game and I couldn't get anywhere near him to ask for an autograph. Then during the game, we got hit with a rainstorm... it didn't seem like it was meant to be. Just as the game was ending, the sun poke through the clouds and the rain let up completely by the time I was out of the ballpark. So I decided to hang around after the game. Teufel was the last one of of the ballpark, but he signed autographs for all of the dozen or so fans who waited for him. He may not have the prettiest autograph, but I definitely appreciated it.
Posted by Paul Hadsall at 12:17 AM

Nice, that's cool that he signed for everyone. I covered that game and briefly spoke with Teufel afterward, which I enjoyed. He was gracious even as he shined his shoes and packed his bag for the bus ride.