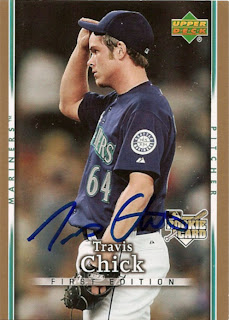 Who is this? former Seattle Mariners pitcher Travis Chick

What is this? An autographed card from the 2007 Upper Deck First Edition set


Where'd I get it? Chick signed it for met at a game between the Camden Riversharks and Newark Bears earlier this year.


How much did it cost? I'm not sure; I have no idea where I got the card.

Why is this so special? Travis Chick was selected by the Florida Marlins in the 14th round of the 2002 draft. He was traded three times before he reached the majors - once for Joe Randa and later for Eddy Guardado.

Chick appeared in three games for the 2006 Seattle Mariners as a September call-up, but I doubt they have many fond memories of him out there. Chick allowed seven runs on seven hits and 10 walks in just five innings.

Since then, Chick has played in the minors for three different organizations. He found his way into independent league baseball in 2010, when he was the Camden Riversharks' opening day starter. On April 22, he pitched five innings and allowed three runs on four hits and three walks in five innings. He surrendered Paddy Matera's first (and, to date, only) professional home run in his final inning of work that night.

Chick has a 5-4 record with a 4.40 ERA in 14 games with Camden. He was placed on the inactive list last month.

Chick does not have a pretty autograph, but you can read it.
Posted by Paul Hadsall at 11:58 PM