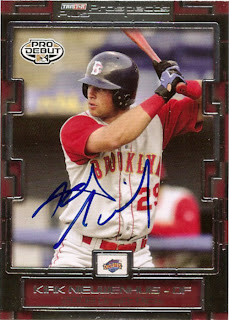 Who is this? Buffalo Bisons outfielder Kirk Nieuwenhuis
What is this? An autographed card from the 2008 TriStar Projections set
Where'd I get it? Nieuwenhuis signed it after a game between the Binghamton Mets and Trenton Thunder earlier this year, before he was promoted.
How much did it cost? I got the card out of a discounted blaster box.

Why is this so special? I caught the Buffalo Bisons game on SNY tonight, so I thought it would be fun to post a card of somebody that played in the game. Kirk (I'm going to go with his first name because I'm not very good at spelling his last name yet) went 1-for-5 with a double and an RBI tonight.

The Mets made Kirk a third round selection in the 2008 draft. He began his pro career in Brooklyn that year, moving up to St. Lucie in 2009 and starting 2010 in Binghamton. A few weeks ago, Kirk got promoted to AAA Buffalo, though he's struggled a bit there. Through 13 games, he was hitting .235 (12-for-59) with one home run and 9 RBI.

Kirk is generally thought to have passed Fernando Martinez as the Mets' best outfield prospect, but there isn't likely to be an opening in New York before the 2012 season.

As you might expect, Kirk has an abbreviated version of his name that he signs for autograph seekers. 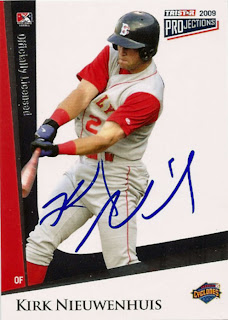 It even varies a little from card to card, as you can see on the 2009 TriStar Projections card that I got signed on the same day.
Posted by Paul Hadsall at 11:45 PM