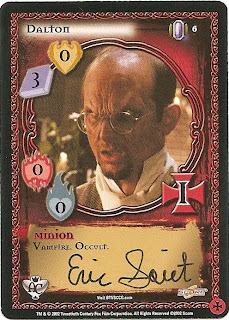 Who is this? Actor Eric Saiet, portraying the vampire Dalton in Buffy the Vampire Slayer
What is this? An autographed card from the short-lived Buffy the Vampire Slayer collectible card game, produced by Score.
Where'd I get it? I wrote to Saiet's agent and asked for an autograph a couple of years ago; I got it back today.
How much did it cost? Postage, basically - the card was a duplicate pulled from a pack.

Why is this so special? Buffy the Vampire Slayer was one of my favorite television shows. A few years ago, I decided to try to find addresses and mail out some extra cards to collect autographs from the guest cast members. I didn't have a lot of luck with the initial attempt, so I didn't continue the project.

In January 2009, I was cleaning out my desk and I found the letter I had written to Saiet. I'd never gotten around to mailing it. I figured I'd attach a couple more cents' postage and see what would happen. Today, I got my card back, signed, along with a short note apologizing for the delay. If he only knew. :)

Saiet is a character actor who has appeared in a number of prime-time shows, ranging from the various Law & Order series, to ER and WB classics like Felicity and Roswell. One of his first credited roles was in Ferris Bueller's Day Off.

Saiet played the bookish vampire Dalton in two second-season episodes of Buffy the Vampire Slayer. He fell victim to a nasty demon called the Judge, who could burn the humanity out of people, because he retained just a little too much human feeling.

Thankfully, Saiet has a clear, legible signature -- otherwise I would have been left to research exactly who's autograph I had gotten. :)
Posted by Paul Hadsall at 10:40 PM

That's really cool. Did they have cards of all the actors that were in Buffy?

Score's collectible card game featured most of the prominent characters (including the one or two episode guest actors like Saiet) for the first three seasons.

The game was cancelled just before they were to put out the fourth season set, but a few promo cards were produced.

Inkworks made a number of more traditional Buffy sets, but aside from a few stray packs I won at a comic con once, I never owned any of their cards.