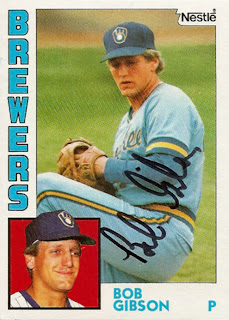 Who is this? Former Milwaukee Brewers pitcher Bob Gibson
What is this? An autographed card from the Nestle's version of the 1984 Topps set.
Where'd I get it? Nearly two years ago, I wrote to Gibson and asked him to sign it. I got it back today.
How much did it cost? The card cost less than 50 cents.

Why is this so special? Robert Louis Gibson made it to the major leagues after beginning his career as an undrafted amateur free agent. In four seasons with the Brewers, he appeared in 97 games. He finished with a 12-18 record and a 4.24 ERA.

I needed a Gibson autograph for my collection because his 98th and final major league appearance came in 1987, when he was called upon to temporarily bolster a Mets pitching staff that had been ravaged by injuries and off-field issues. Gibson's New York Mets career lasted just one inning. He faced four batters, walking one and striking out two.

The card Gibson signed is somewhat unusual. In 1984, Topps produced a parallel set for Nestle to use for a sendaway promotion. The Nestle cards are identical to the regular Topps cards, except the Nestle logo replaces the Topps logo on the card front.

The Nestle cards were only distributed in 132-card uncut sheets, but many of the sheets were cut and sold as individual cards.

Gibson has a neat autograph, and he took care to sign the card so that he wouldn't write over his face. He also signed a 1988 CMC Rochester Red Wings card for me in more conventional fashion. 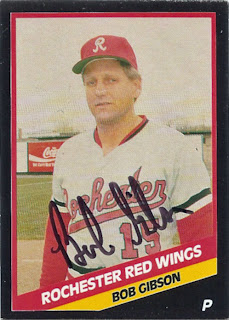 Ooh. Any chance you'd be willing to trade the Red Wings Gibson? Still need him for my collection as well.

If you can help me with anyone I still need, I'm certainly willing to consider it.