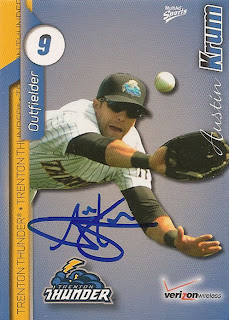 Why is this so special? This is the coolest card in the Trenton Thunder team set this year. Krum is attempting to make a diving catch, which is much more interesting than the more standard shots of hitters at bat or pitchers throwing.

The Yankees selected Krum in the 9th round of the 2007 draft. Although he has never shown a lot of skill at the plate, Krum has steadily moved through the Yankees farm system. This year, he is batting .235 with five home runs and 38 RBI in 108 games for Trenton.

Krum has a neat-looking -- if mostly illegible -- autograph.
Posted by Paul Hadsall at 11:17 PM