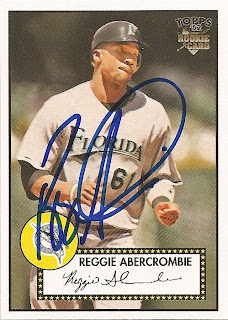 Who is this? Sioux Falls Pheasants outfielder Reggie Abercrombie

What is this? An autographed card from the 2006 Topps 52 set

Where'd I get it? Zach sent it to me; I believe he got it signed at a game between the Pheasants and the Wichita Wingnuts earlier this year.


Why is this so special? Well, it's always cool when people decide to send you cards. :)

Abercrombie was selected in the 23rd round of the 1999 draft by the Los Angeles Dodgers, but he didn't make it to the major leagues until 2006 with the Florida Marlins. The Mets and Marlins play each other quite a bit during spring training, so I saw Abercrombie a lot. He had a nice spring that year, and I thought he'd be a star.

The Marlins seemed to think enough of Abercrombie to give him a shot. Unfortunately, Abercrombie hadn't quite mastered the art of hitting even though he did show occasional flashes of skill. (This is perhaps why I'm not really a prospector.) He played one more year with the Marlins, and spent part of 2008 with the Astros.

Abercrombie is now playing in the independent American Association, where he is hitting .338 with 20 home runs, 82 RBI and 34 stolen bases.

For a guy with a long name, Abercrombie has a pretty decent autograph.
Posted by Paul Hadsall at 7:52 PM

Reggie hit a home run in his first at-bat after signing that card - MOJO!!