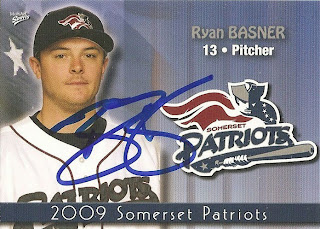 Who is this? York Revolution pitcher Ryan Basner

What is this? An autographed card from the 2009 Somerset Patriots team set

Where'd I get it? Basner signed it for me before a game between the Revolution and Newark Bears earlier this year.

How much did it cost? My Dad picked up the team set when he went to a Somerset game last year and gave it to me.

Why is this so special? This is the only signed card that I have from the 2009 Somerset team set, though Basner's autograph is not particularly legible.

Basner was a 7th round draft pick of the Atlanta Braves in 2003. He was primarily a reliever in their farm system, and he made it all the way to AAA Richmond in 2008. He did not have an especially good season, so he found himself in independent baseball last year. He was part of an Atlantic League championship team with the Somerset Patriots last year, but this season Basner is pitching for the York Revolution.
Posted by Paul Hadsall at 11:40 PM

That looks more like a Royals-style 6x4 player postcard than a baseball card. Looks like a unique set.

I like the design it's so decent, great set.

It is a neat design, but they fell in love with it - Somerset did a variation on it for two or three years in a row.

Interestingly, the players all hated it the first year because they thought the mug shots & logo combination was boring - they preferred action shot cards.

I got a bunch of cards from that set signed last season. And I agree with the players, I like action shots muuuuch better.