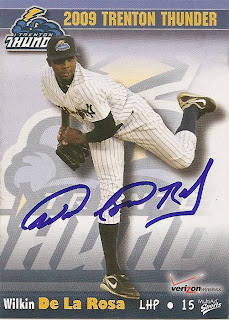 Who is this? Trenton Thunder pitcher Wilkin de la Rosa
What is this? An autographed card from last year's Trenton Thunder team set
Where'd I get it? de la Rosa signed it for me after a game in Trenton earlier this month.
How much did it cost? I believe the team set cost $10.


Why is this so special? Wilkin de la Rosa made the news yesterday because Major League Baseball is investigating him and New York Yankees pitcher Ivan Nova for allegedly injecting each other with vitamin B-12. While B-12 is not on Major League Baseball's list of banned substances, only licensed doctors are supposed to inject medication.

De la Rosa made his professional debut with the Gulf Coast League Yankees in 2007. He has pitched for the Trenton Thunder for the past two seasons. In 33 games (8 starts), he has a 2-4 record with a 5.00 ERA this season.

De la Rosa has an interesting autograph, but I really can't make out many of the letters. Here's another example, on this year's Trenton Thunder team set card. 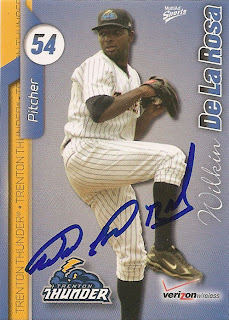