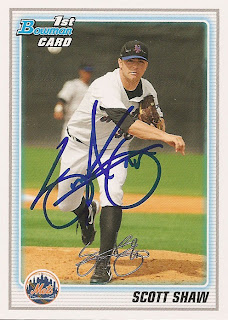 Who is this? Binghamton Mets pitcher Scott Shaw


What is this? An autographed card from the 2010 Bowman set

Where'd I get it? Shaw signed it for me after a game in Trenton earlier this year.

How much did it cost? Fifty cents?


Why is this so special? Scott Shaw was the Mets 13th round selection in the 2008 draft. He had a good season for Brooklyn that year, but his stats haven't really stood out since then. He has advanced through the system and is currently on the Binghamton Mets roster.

He has a fairly artistic autograph, which is a pretty good match for the facsimile signature on his card.
Posted by Paul Hadsall at 11:55 PM