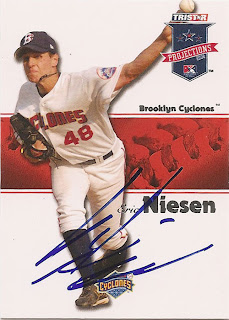 Who is this? Binghamton Mets pitcher Eric Niesen

What is this? An autographed card from the 2008 TriStar Projections set


Where'd I get it? Niesen signed it for me after a game in Trenton earlier this year.

How much did it cost? About a quarter.


Why is this so special? Niesen, yet another Mets farmhand, was a third round draft selection in 2007. Although he's never put up eye-popping stats, Niesen has progressed steadily through the farm system. Until this year, he's worked exclusively as a starting pitcher.

I'd guess his best shot of reaching the majors is as a situational lefty, though I have no idea if he's actually effective against left-handed batters. (Then again, that's never mattered much to Jerry Manuel)