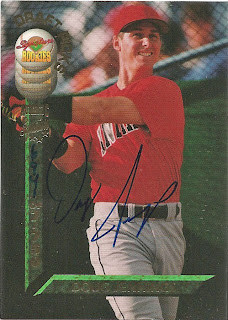 Who is this? former Oakland Athletics outfielder Doug Jennings

What is this? An autographed card from the 1994 Signature Rookies Draft Picks set

Where'd I get it? A baseball card show dealer's dollar box

Why is this so special? I remember Doug Jennings best from the final days of his career, when he was a player/coach for the Long Island Ducks in 2005. He is actually one of the best players in the independent league team's history, probably not a mark that he ever wanted to achieve.

Jennings seems an odd choice for a draft pick set from 1994; he was a second round pick by the California Angels in the 1984 draft. By the time this card came out, Jennings had finished his entire 189-game major league career - though I'm sure he didn't realize it.

Before he hung up his spikes, Jennings played in over 1600 minor league and independent league games. He also spent three years in Japan playing for the Orix Blue Wave. It might not have been the career that Jennings dreamed of when he signed his first pro contract, but it wasn't a bad one.

Jennings had a fairly legible signature in 1994, though if I recall correctly it was looking a bit sloppier towards the end of his career.
Posted by Paul Hadsall at 11:20 PM