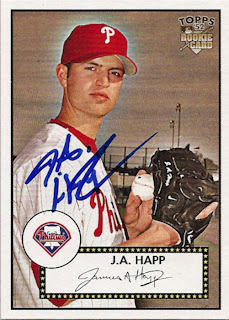 Who is this? Houston Astros pitcher James Anthony Happ
What is this? An autographed card from the 2007 Topps 52 set.
Where'd I get it? Happ signed it for me before today's game between the Astros and the Mets at CitiField.
How much did it cost? I think the card came out of a pack.

Why is this so special? I actually managed to get a card signed at CitiField - it's something of an accomplishment, since there aren't all that many places in the park where you can reach a player to hand him a card.

Happ was selected in the third round of the 2004 draft by the Philadelphia Phillies. He made his major league debut in 2007 and was part of the 2008 and 2009 playoff teams. Happ was chosen as the Sporting News Rookie of the Year in 2009 after finishing with a 12-4 record and 2.93 ERA.

Happ has an interesting autograph. The letters J.A. are clearly written, but I don't know what's going on with his last name.
Posted by Paul Hadsall at 10:16 PM