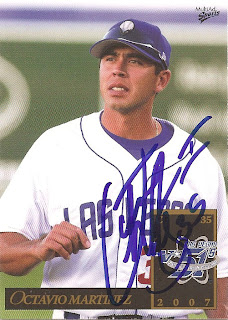 Who is this? Lancaster Barnstormers catcher Octavio Martinez
What is this? An autographed card from the 2007 Las Vegas Stars team set
Where'd I get it? Martinez signed it for me before last nights game between the Barnstormers and the Bears in Newark.
How much did it cost? $1 from an eBay dealer I found while seeking the missing cards in my 2010 New Britain Rock Cats team set (I still need one more, and I don't know who it is.)


Why is this so special? Martinez was selected by the Baltimore Orioles in the 10th round of the 1999 draft after being named the Western State Conference Player of the Year. He was the 2000 Appalachian League Player of the Year, hitting .387 for the Bluefield Orioles.

Martinez's hitting success did not continue when he moved on to full-season leagues, and he quickly settled into a backup role. During a nine-year minor league career, Martinez spent time in the Orioles, Pirates and Dodgers organizations.

For the past three years, he has played independent ball. In 2008, he played for Long Beach in the Golden League. Last year, he played for the Southern Maryland Blue Crabs in the Atlantic League. This season, he's a member of the Lancaster Barnstormers.


Martinez had a little fun with me last night. When I called him over, I showed him the card and his initial reaction was "I don't sign that photo." I've run across enough players and coaches that really do refuse to sign certain cards for various reasons, so I took him at his word.

Fortunately, he was just joking and signed the card for me. I can't really make out the signature, but it looks like he included his Las Vegas uniform number at the end.

The Las Vegas 51s have my favorites team name and logo. Years ago, I ordered a bobblehead of the mascot, Cosmo and a keychain with the team's alien head logo even though I've never seen them play a game.
Posted by Paul Hadsall at 11:31 PM