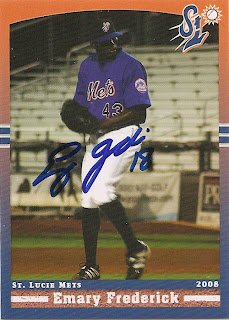 Who is this? Rockford Riverhawks pitcher Emary Frederick

What is this? An autographed card from the 2008 St. Lucie Mets team set


Where'd I get it? Frederick signed it for me before a game in Trenton when he was playing for the Binghamton Mets earlier this year.

How much did it cost? I spent around $10 for the team set.

Why is this so special? Frederick appears to have been an undrafted free agent when he joined the Mets organization in 2007 at the age of 23. Aside from an impressive K/BB ratio in 2008, nothing really jumps out in his stat line. So I guess it shouldn't be a huge shock that Frederick got caught up in a numbers situation and was released last month, but I didn't realize it had happened until I went looking up his stats for this post.

Frederick is now playing independent ball in the Northern League. I find it interesting that he credits his former Binghamton Mets' teammate Derrick Ellison for steering him towards the Northern League. Ellison also played in the Atlantic League, but I can certainly think of a few reasons that a pitcher might not want to steer a teammate there.

Frederick has an interesting signature, but the letter "E" is the only part that I find easy to make out.
Posted by Paul Hadsall at 11:34 PM

Who's he playing for now?

Frederick is currently a member of the Rockford Riverhawks... but he had at least one rough outing that left him with a four-digit ERA.