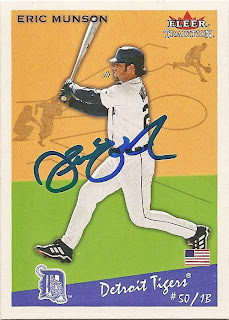 Who is this? Newark Bears third baseman Eric Munson
What is this? An autographed card from the 2002 Fleer Tradition set
Where'd I get it? Munson signed it after a game in Newark earlier this month.
How much did it cost? I got the card out of a pack.


Why is this so special? Eric Munson was the third overall selection in the 1999 draft. He was chosen ahead of Barry Zito, Ben Sheets and Brian Roberts, among others.

Munson appeared in 361 games over a nine year major league career with Detroit, Houston, Tampa Bay and Oakland. In 2004, he hit a home run 457 feet over the center field fence at Comerica Park, the longest home run ever hit there to that point.

Munson had been playing with the AAA Portland Beavers in the Pacific Coast League until July. He is hitting .206 with 4 home runs and 7 RBI in 17 games for the Bears.

Munson does not like to sign autographs before the game and made us wait around until afterwards to get our cards signed. Even though he made the last out that spoiled a ninth-inning rally, he kept his promise to sign autographs.

Here is the 2005 Fleer card that he also signed that day. 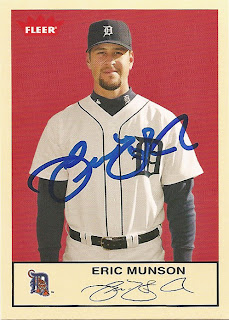 Munson has a loopy signature, but it hasn't changed much from the one printed on his 2005 card.
Posted by Paul Hadsall at 11:31 PM

And he tried to kill me!

Brandon Larson once lined two or three foul balls near my seat, but I've never been the target of a bat. I'm glad you weren't hurt.