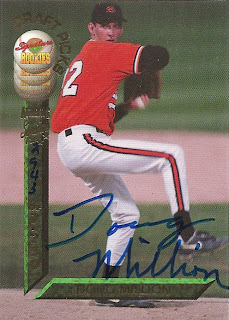 Who is this? former minor league pitcher Doug Million


What is this? An autographed card from the 1994 Signature Rookies Draft Picks set

Where'd I get it? The dollar box of a dealer at the local card show


Why is this so special? I had never heard of Doug Million before I saw this card, but I had to get it because of his name. The Colorado Rockies made Million the 7th overall selection in the 1994 draft. According to Wikipedia, he won the Gatorade High School Baseball Player of the Year Award in 1994.

Million played in the minor leagues for four seasons, advancing as far as AA New Haven. In 1997, he died after suffering an asthma attack. Now I'm depressed - nobody should die that young.
Posted by Paul Hadsall at 10:52 PM

I'm pretty sure I have a Topps draft pick card of him. I had no idea that he had died, though. That is sad.

I would think that the Gatorade High School Baseball Player of the Year Award winner would have been drafted higher than the seventh round.

He was the seventh overall selection in the first round.

Beckett says he did have a card in the 1994 Topps set, one of about 60 or so produced for him (and that probably doesn't include all the minor league team set issues.)

That's what happens when I comment at 2:42 in the morning.