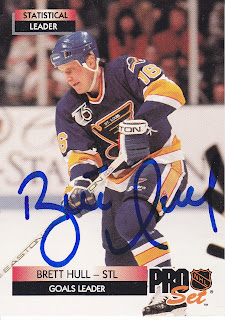 Who is this? One of the newest members to the Hockey Hall of Fame, Brett Hull

Where'd I get it? Through the mail in the early '90s

How much did it cost? Got the card in a pack plus a couple of 25 or 26 cent stamps

Why is this so special? It's Brett Hull, who was inducted into the Hall today.

Brett has 741 goals for his career, which is third all-time. He was an 8-time All Star with the Blues and Stars. He scored 50 goals in 50 games twice and is one of two players to do it more than once (some guy named Gretzky is the other). He had 33 hat tricks in his career and he led the league in scoring three times. He had more playoff power play goals than anyone else. He is the only player to score 50 goals in college, the minors, and the NHL. Plus, he has his name on Lord Stanley's Cup twice.

Basically, Brett Hull was one of the premier hockey players of his generation.
Posted by zman40 at 7:50 PM

Yeah, I didn't want you to feel like you were doing all the work, so I pitched in. It happened to be some good timing with the Hall of Fame induction.

Very much appreciated. I've been sick and I'm just starting to feel better, so I think anything I might have posted would have been even less coherent than the rant on my site. :)