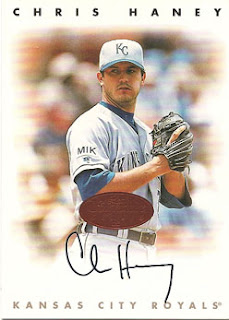 Who is this? Chris Haney, a former pitcher with the Montreal Expos, Kansas City Royals, Cleveland Indians and Boston Red Sox

Where'd I get it? This is another purchase from last weekend's card show

Why is this so special? Chris Haney is the son of former catcher Larry Haney and cousin of former infielder (and Mets coach) Mike Cubbage. He spent parts of 8 seasons in the majors, compiling a 38-52 lifetime record with a 5.07 ERA.

His most notable "accomplishment" is being the pitcher who gave up Wade Boggs' 3000th hit.

The grey KC hat really made the card stand out. I'm not sure how long it lasted, but I hope it wasn't much longer than the white "ice cream man" cap that the Mets experimented with in the 1990s. The letters "MIK" are a tribute to owner Muriel Irene Kauffman, who died during the 1995 season.

Chris Haney has a fairly simplified autograph, but I guess I can't blame him since he had to sign a few thousand of these cards.
Posted by Paul Hadsall at 9:36 AM