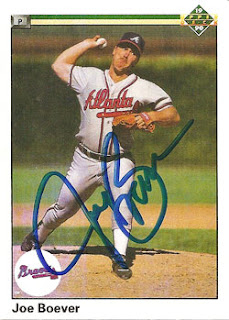 What is this? An autographed card from the 1990 Upper Deck set

Where'd I get it? I wrote to Joe Boever after Christmas last year and asked him to sign it. I got it back today.

How much did it cost? I'm not sure where the card came from; the only real cost was the 84 cents for postage.

Why is this so special? The Atlanta Braves weren't very good when Joe Boever was their closer, so it was ok to root for "Boever the Saver." It was a good story... a journeyman reliever got a chance to be a closer and saved 21 games for an Atlanta team that only won 67 in 1989.

By 1990, the league started to catch up with Boever's palmball. The Braves traded him to Philadelphia for "Starvin' Marvin" Freeman. Boever pitched in the big leagues for another six seasons, but he was never a closer again after 1990.

After he retired, Boever went into coaching. He is now a real estate agent in Tennessee.

Boever has a nice autograph. I like how the letter "B" loops around part of his last name.
Posted by Paul Hadsall at 7:12 PM

That's quite a wait.

My record is a Jay Bell card that came back over three years after I sent it out.