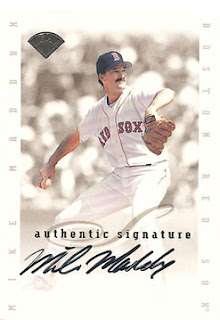 Why is this so special? This is the last of the Leaf Signature Series cards I picked up at this month's card show. So I won't have any more to post unless I find another group of them next month. :)

Mike Maddux is the elder brother of future Hall-of-Famer Greg Maddux. He spent parts of 15 seasons in the big leagues, finishing with a 39-37 lifetime record and a 4.05 ERA. After he retired as a player, Maddux went into coaching. He is now the pitching coach for the Texas Rangers.

As I noted yesterday, the Leaf Signature Series cards are well-designed to showcase the players' autographs.
Posted by Paul Hadsall at 6:31 PM

Just a side note.. this is the only card ever made (that I can find) of Mike Maddux in a Red Sox uniform ... I'm a Red Sox collector