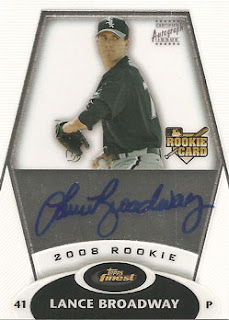 Who is this? Lance Broadway, a pitcher for the New York Mets (formerly of the Chicago White Sox)

What is this? An autograph card from the 2008 Topps Finest set

How much did it cost? 99 cents, plus shipping

Why is this so special? Lance Broadway has a perfect name for a baseball player in New York... now he just has to do something worthy of attention. He was a late season call-up for the Mets this year, but he didn't really distinguish himself in 8 relief appearances (0-0, 6.75).

The Mets acquired Broadway from the Chicago White Sox for catcher Ramon Castro in May. Broadway didn't do all that much to distinguish himself in the American League, either. His career record with the White Sox (2-2, 5.13) was compiled during 19 games over three seasons.

Broadway is just 26, so there's still time for him to improve. But he'd better start making an impression soon.

Lance Broadway has a neat, clear autograph... but that is one interesting "B" in his last name.
Posted by Paul Hadsall at 8:19 PM

Is that on-card or a sticker?

I think it is a sticker. But I think alot of Topps and Bowman rookie auto's are unvalued now but will be worth more in the future.

Shockingly, it's an on-card autograph.