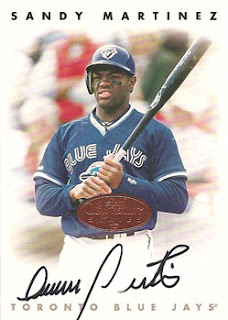 Where'd I get it? I bought it at a baseball card show last weekend

Why is this so special? Sandy Martinez played in the majors for parts of 8 seasons, but he only got into 218 games. Still, that's 218 games more than most everybody else.

In 2006, he was invited to spring training by the New York Mets, but he never got the call. He spent the season in AAA with Norfolk, where I got to see him play in a couple of games.

Martinez has a neat autograph, but there is no way I'd ever connect it with the name "Sandy Martinez." I think I'd have an easier time reading it as "Ariel Prieto."
Posted by Paul Hadsall at 8:35 PM