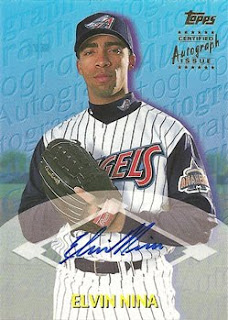 Who is this? Elvin Nina, a former pitcher who enjoyed a 10-year professional career

What is this? An autographed card from the 2000 Topps Traded Autographs insert set

Where'd I get it? I bought at a local baseball card show this weekend.

Why is this so special? Though Elvin Nina played professionally for 10 years, he never reached the major leagues. But he did go to high school a couple of towns over from where I grew up, and I got to see him play professionally in his final season with the Atlantic League's Road Warriors.

He has a nice, clear autograph. I wish more players took the same pride in their signature.
Posted by Paul Hadsall at 8:47 PM