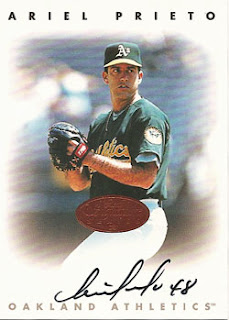 Who is this? Ariel Prieto, a former Oakland Athletics and Tampa Bay Devil Rays pitcher

What is this? An autograph card from the 1996 Leaf Signature Series

Where'd I get it? I bought it at a baseball card show last weekend

Why is this so special? Ariel Prieto earned his fame with the Cuban National Team. He was widely expected to be the first overall pick in the 1995 amateur draft, but he lasted until the Oakland Athletics took him with the number five pick. He made his Major League debut later that year.

In six seasons, Prieto compiled a 15-24 record with a 4.85 lifetime ERA. This season, he was a coach for the A's Arizona League team.

The card comes from the 1996 Leaf Signature Series, the first major release to guarantee an autograph in every pack.

Prieto has a neat, careful signature, but I think I'd have a hard time deciphering his handwriting.
Posted by Paul Hadsall at 8:41 PM

I bought two packs of those cards and I wasn't that impressed with the autographs that I got. Plus, those things were exspensive!

nice pickup for a dollar. It's amazing how quickly guys get forgotten. There are lots of those 96 Leafs floating around for really cheap these days. I wanted if that will be the fate of Sweet Spot commons in 15 years.

I love the Leaf Signature Series cards, but that's because I wasn't collecting when they came out. I imagine if I was buying them in pack form, I'd have a bit of a different opinion.

I think the common Sweet Spots are definitely doomed to future dollar bins if they don't fade.

Last year, I got two Huston Street autographs -- an Upper Deck Black numbered to 50 and a Triple Threads numbered to 75 for a total of $7 shipped on eBay. Percentage wise, I think the Leaf cards probably did a better job of retaining value. :)