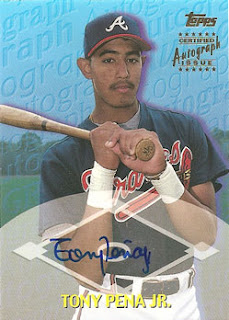 Who is this? Tony Pena Jr., a former shortstop for the Atlanta Braves and Kansas City Royals

What is this? An autographed card from the 2000 Topps Traded Autographs insert set

Where'd I get it? This is yet another baseball card show purchase

Why is this so special? Tony Pena Jr. is the son of former catcher and former Kansas City Royals manager Tony Pena. He reached the majors in 2006 with the Atlanta Braves, but he was traded to Kansas City before the 2007 season.

But he's still trying. He went back to the minors and is trying to make it as a pitcher now.

Tony Pena Jr.'s autograph looks like it was definitely influenced by his father's.
Posted by Paul Hadsall at 11:24 PM

The kid tried. I was pretty happy when he hit two triples on Opening Day in 2007. You don't see that too much.

But, it was all downhill from there.

I hope he keeps it up as a pitcher. Best of luck to him!