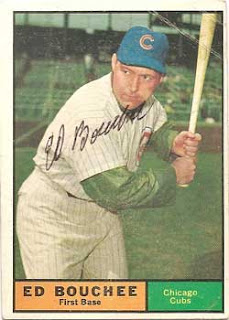 Who is this? Ed Bouchee, a first baseman for the Philadelphia Phillies, Chicago Cubs and New York Mets

What is this? An autographed card from the 1961 Topps set

Where'd I get it? I wrote to Ed Bouchee and asked him to sign it last month. I got it back about a week later.

How much did it cost? Maybe 50 cents for the card, and another 88 cents for postage.

Why is this so special? This is one of the oldest cards I've ever gotten signed.

Bouchee was the runner up for the NL Rookie of the Year award in 1957, losing to his teammate Jack Sanford.

Bouchee was also an original New York Met, selected in the expansion draft following the 1961 season.

Like many older players, Bouchee clearly takes pride in his signature. You can read every letter.
Posted by Paul Hadsall at 7:13 PM

I figured I'd try to get this blog going again. I felt a little bit bad about letting things die off here during the season.