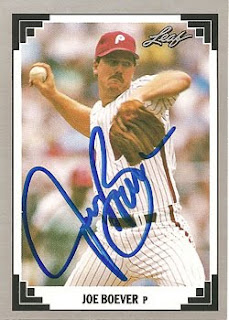 What is this? An autographed card from the 1991 Leaf set

Where'd I get it? I wrote to Joe Boever after Christmas last year and asked him to sign it. I got it back Monday along with the one I had previously posted.

How much did it cost? The card came out of a $10 wax box a few years ago, so really just postage.

Why is this so special? Out of the multitude of teams Boever played for, I really only have memories of him as a Brave and a Phillie... and he was better as a Brave.

I like the 1991 Leaf cards; even though they are junk wax, I couldn't really afford them when they were new. So I never had the chance to get sick of them like most of the other cards from that year. And Boever's card has a nice photo. It looks great signed.
Posted by Paul Hadsall at 9:26 PM