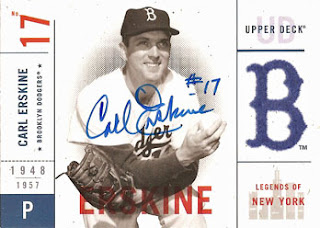 Who is this? Carl Erskine, a former pitcher for the Brooklyn and Los Angeles Dodgers

What is this? An autographed card from the 2001 Upper Deck Legends of New York set, #2

Where'd I get it? I wrote to Carl Erskine earlier this month and asked him to sign it; I got it back yesterday.

How much did it cost? The card was free. (I got it from the same dealer who sold me all of the Leaf Signature Series cards I've been posting this month.) Postage was 88 cents.

Why is this so special? Carl Erskine was a major league pitcher for 12 seasons. He had a lifetime 122-78 record with a 4.00 ERA. He threw two no-hitters and appeared in 11 World Series games. For a time, he held the record for strikeouts in a World Series game with his 14 strikeout performance in game 3 of the 1953 World Series.

Erskine authored two books about his playing days: "What I Learned From Jackie Robinson: A Teammate's Reflections On and Off the Field" and "Carl Erskine's Tales from the Dodgers Dugout: Extra Innings"

I'm not sure how much fanmail Erskine still receives (SportsCollectors.Net has logged 26 autograph requests in the past two months), but I'm amazed that he seems to take the time to carefully sign everything that people send to him. I'm happy to have an autograph from one of the great names of New York National League baseball.
Posted by Paul Hadsall at 10:48 AM