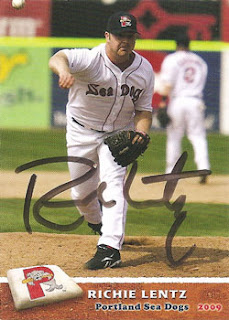 Who is this? Boston Red Sox prospect Richie Lentz

What is this? An autographed card from the 2009 Portland Sea Dogs team set

Where'd I get it? I wrote to Lentz c/o the Mesa Solar Sox last month and asked him to sign it, along with the 2008 Lancaster Jet Hawks card I posted a couple weeks ago.

How much did it cost? The card was a gift from a friend, so just the postage.

Why is this so special? Out of the eight Arizona Fall League players I wrote to this year, Lentz and Chris Province are the only ones who signed the cards and sent them back.

Plus, the card has a pretty cool photo of Lentz warming up. You can tell that this wasn't a real game action shot because the infielder in the background is staring out into center field. You don't see photos like that make it on to major league cards very often.

Lentz still has a nice autograph for a current player, but I think his Sharpie was on its last legs when he signed the two cards for me.
Posted by Paul Hadsall at 9:45 PM

I like that card set. The thing that I like about it is the base with the team logo on it. There have been a few sets with logos on the plate, but I don't think that I have seen a base used that way.

It is one of the nicer minor league set designs. I'm sure it has been used by other teams, but I don't think I've see any yet.