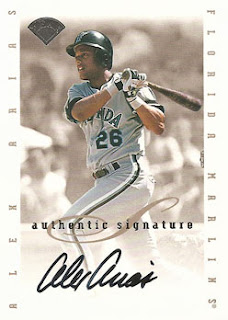 Who is this? Alex Arias, a former infielder for the Chicago Cubs, Florida Marlins, Philadelphia Phillies, San Diego Padres and New York Yankees

Why is this so special? Alex Arias was an original Florida Marlin, acquired in an expansion draft-day trade with the Cubs, along with Gary Scott, for Greg Hibbard. He is one of just two original Marlins who were still in Florida when the Marlins won the 1997 World Series. That's not bad for a utility infielder who never had more than 390 at-bats in a season.

Arias clearly took the time to write all of the letters in his name, but he doesn't have a particularly neat signature. Then again, neither would I if I had to sign a few thousand baseball cards. :)

Happy Thanksgiving!
Posted by Paul Hadsall at 9:13 AM