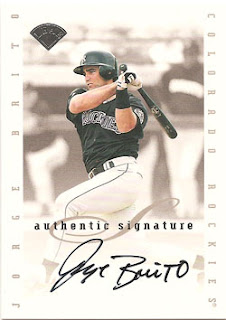 Who is this? Jorge Brito, a former catcher for the Colorado Rockies

Why is this so special? There's not much to say about Jorge Brito. He was a backup catcher for the 1995 & 1996 Colorado Rockies teams, but he only appeared in 26 Major League games. His lifetime numbers are a .185 batting average, no home runs and seven RBI.

Brito spent 14 seasons as a pro, beginning in 1986 with the Medford A's and finishing with the Louisville RiverBats in 1999. He had over 2,200 minor league at-bats, finishing with a .240 lifetime average, 51 home runs and 276 RBI. That's a lot of baseball for what turned out to be a pretty brief shot.

Brito's signature is legible, but it's an interesting mix of cursive and printed characters.
Posted by Paul Hadsall at 5:19 AM