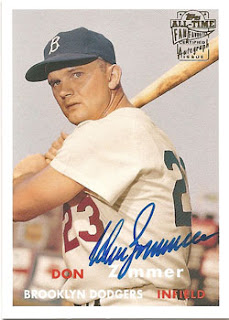 What is this? An autographed card from the 2004 Topps All-Time Fan Favorites set

Why is this so special? Don Zimmer is a baseball lifer. He signed with the Brooklyn Dodgers at the age of 18, and he's been involved with baseball as a player, coach, manager or executive ever since.

Zimmer was an original member of the New York Mets. He was the third baseman in the first game they ever played.

As with many old-time baseball players, Zimmer has a neat, clear autograph.
Posted by Paul Hadsall at 5:13 PM

that is a nice card!

I can't believe how young Zimmer looks there... but since the photo is more than 50 years old, I guess I shouldn't be so surprised.