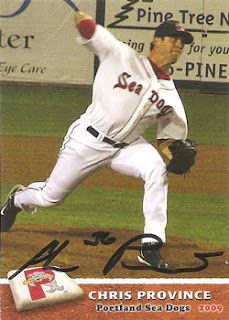 Who is this? Chris Province, a pitcher for the Portland Sea Dogs

What is this? An autographed card from the 2009 Portland Sea Dogs team set

Where'd I get it? I wrote to Chris Province c/o his Arizona Fall League team and asked him to sign it last month. I got it back about a week later.

How much did it cost? The card was a gift from a friend, so just 88 cents for postage.

Why is this so special? I think I already mentioned that I love minor league cards.

The Portland Sea Dogs have a great logo (sea dog can mean "Any of various seals or similar marine mammals" in case you're wondering why it doesn't feature an old sailor.)

Chris Province was the Red Sox 4th round pick in the 2007 amateur draft. He has progressed through the Boston farm system and was a member of the Eastern League All-Star team this year. He doesn't have the strikeout numbers that would open eyes, but he seems to enjoy success anyway. Maybe we'll see him in the big leagues someday.

I'm not sure what to make of Chris Province's signature, but I like how he carefully placed it at the bottom of the card instead of signing over a large portion of his photo or his name.
Posted by Paul Hadsall at 5:58 PM