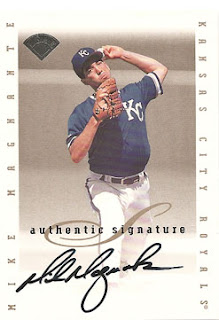 Who is this? Mike Magnante, a former reliever for the Kansas City Royals, Houston Astros, Anaheim Angels and Oakland Athletics

Why is this so special? Mike Magnante spent parts of 12 seasons in the Major Leagues, primarily as a middle reliever. According to his Wikipedia entry, Magnante once struck out the side on nine pitches.

Donruss undoubtedly overestimated the value that collectors would place on autographed cards of players like Magnante, but they designed some nice cards that really showcase the autograph. And the players -- for the most part -- made sure to sign them with nice, clear autographs. Magnante is no exception.
Posted by Paul Hadsall at 10:18 PM

How many of these bad boys did you pick up?

I wish that I would have saved the money on the two packs I bought to have given to you when you went to the show.

These are definitely some good looking autograph cards. They just don't make them like they used to.